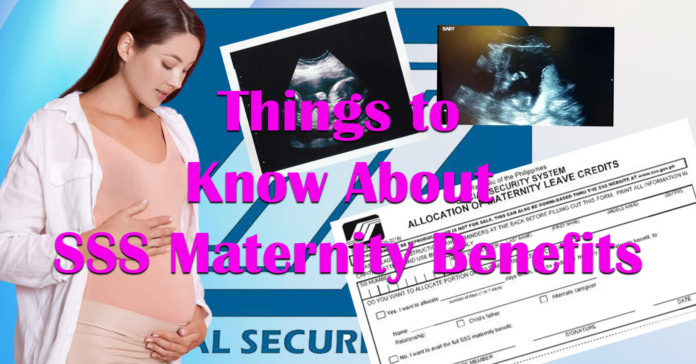 This article will discuss things you should know about the new law, the 105-Day Expanded Maternity Leave (EML) Law, or the Republic Act No. 11210. This law increases the Leave period of female workers to one hundred five (105) days. Female workers can also extend for thirty (30) days without pay and grant fifteen (15) days for solo mothers and other purposes.

Female SSS members shall be granted one hundred five (105) days maternity leave with full pay regardless of civil status, employment status, and whether the child is legitimate or illegitimate.

Female workers who had a miscarriage and emergency termination of pregnancy shall be granted sixty (60) days paid leave.

Suppose the female member qualifies as a solo parent under Republic Act No. 8972, also known as the “Solo Parents’ Welfare act of 2000”. She can avail herself of an additional fifteen (15) days of paid leave.

Manner of Enjoyment of the Benefit 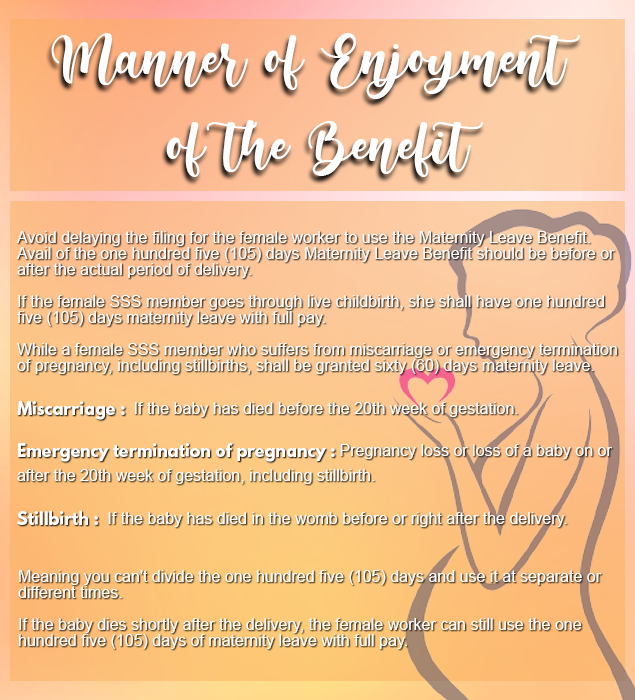 If the female SSS member goes through live childbirth, she shall have one hundred five (105) days maternity leave with full pay.

While a female SSS member who suffers from miscarriage or emergency termination of pregnancy, including stillbirths, shall be granted sixty (60) days maternity leave.

Miscarriage. If the baby has died before the 20th week of gestation.

Emergency termination of pregnancy. Pregnancy loss or loss of a baby on or after the 20th week of gestation, including stillbirth.

Stillbirth. If the baby has died in the womb before or right after the delivery.

Meaning you can’t divide the one hundred five (105) days and use it at separate or different times.

If the baby dies shortly after the delivery, the female worker can still use the one hundred five (105) days of maternity leave with full pay. 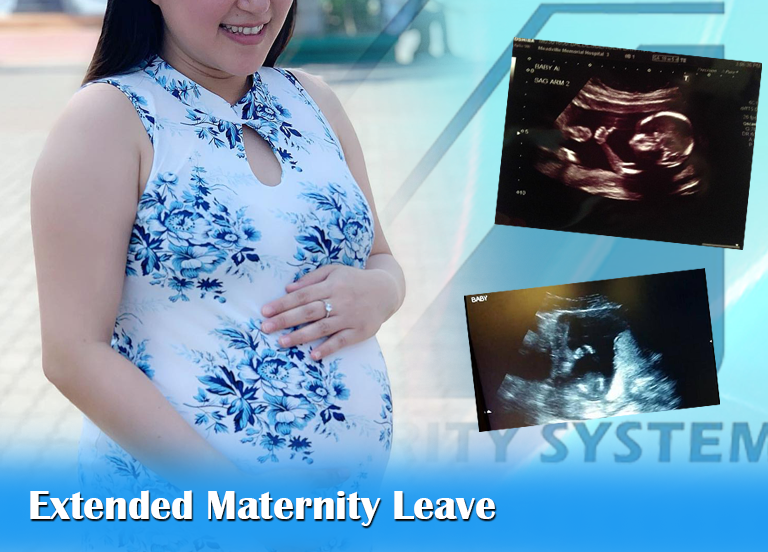 Female SSS members who went through live childbirth have an option to extend their leave for an additional thirty (30) days without pay. They can avail of the extension provided the employer gives due notice.

However, if a sudden medical emergency to the female worker, no prior notice will be necessary but a subsequent statement.

Frequency of the Grant

Regardless of the frequency of pregnancy, a qualified female worker shall be granted Maternity Leave Benefits in every case of pregnancy, whether live childbirth, miscarriage, or emergency termination of pregnancy.

For example, suppose a female worker suffers from a miscarriage, and they granted her sixty (60) days maternity leave benefit.

However, the fifteen (15) calendar day period is not applicable if they terminate a female worker without a just cause.

Just cause — a justifiable and lawful ground for action.

In such circumstances, where they terminate the female worker without cause, the employer must pay the total amount equivalent to her salary. The female worker should receive her total compensation for one hundred five (105) days for childbirth and sixty (60) days for miscarriage or emergency termination of pregnancy based on her full pay.

The Implementing Rules and Regulations (IRR) of the Republic Act (R.A.) No. 11210, nothing is stated to lessen the existing maternity benefits given to the female worker.

Whether or not these current benefits are granted under the Collective Bargaining Agreement (CBA) or present laws if the benefit is more favorable to the female worker. The female member must complete the one hundred five (105) days Maternity Leave benefits for live childbirth and sixty (60) days for the female who underwent miscarriage or emergency pregnancy termination.

Moreover, as mentioned above, a female worker who underwent live childbirth has an option to extend her maternity leave and be allowed to any other working arrangement to which the female worker shall agree. However, the employer shall be given written consent by the female worker and ensure that the extension will promote maternal functions and the requirements of postnatal care. 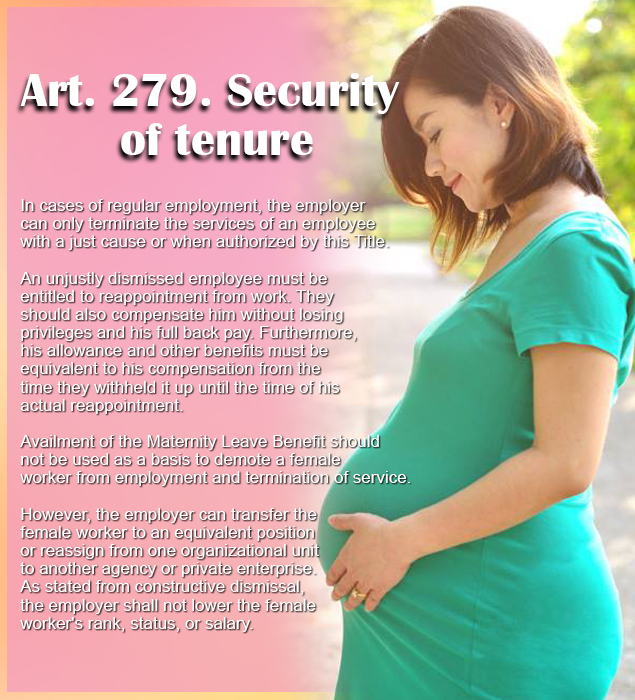 Whether in the public or private sector, every female worker should assure who avails of the Maternity Leave Benefit of the security of tenure.

What is the Security of Tenure?

From Book VI – Post Employment under Title 1 – Termination of Employment.

Art. 279. Security of tenure. In cases of regular employment, the employer can only terminate the services of an employee with a just cause or when authorized by this Title.

An unjustly dismissed employee must be entitled to reappointment from work. They should also compensate him without losing privileges and his full back pay. Furthermore, his allowance and other benefits must be equivalent to his compensation from the time they withheld it up until the time of his actual reappointment.

Availment of the Maternity Leave Benefit should not be used as a basis to demote a female worker from employment and termination of service.

Constructive Dismissal. According to Labor Law, Constructive dismissal refers to an involuntary resignation or forced to resign because of the job affected by some circumstances like:

The employer must prove that such managerial measures do not constitute constructive dismissal.

Whether the female worker is in the private or public sector, no employer shall discriminate against women’s employment to avoid the benefits provided for in this Rules.

Former Presidential Spokesperson of President Rodrigo Duterte Atty. Salvador Panelo warns employers, associations, partnerships, corporations, or any other institution that they will hold responsible if they decline to hire women to evade the forthcoming circumstances regarding the new law, the Maternity Leave Law. 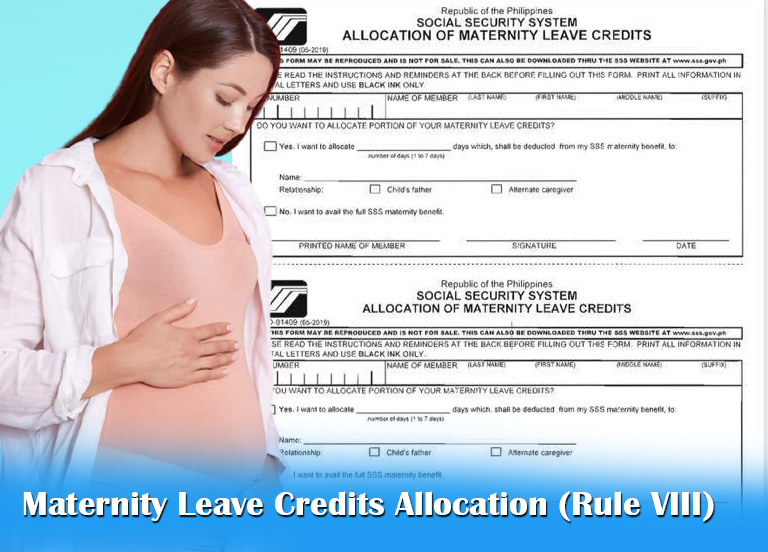 A female worker who avails of Maternity Leave Benefits has an option to allocate up to seven (7) days of said benefits to the child’s father whether or not married to the female worker.

Furthermore, the female worker may allocate to an alternate caregiver in case of death, absence, or incapacity of the child’s father.

They cannot allocate the maternity leave benefit if the female worker suffers a miscarriage or emergency pregnancy termination.

In case the child’s father won’t be able to use the allocation due to death, absence, or incapacity, the alternate caregiver shall be granted by his employer the amount of the maternity benefit equivalent to one (1) to (7) days.

A notice should be submitted along with her maternity leave application to file for the allocation of benefits. Furthermore, the child’s father or the alternate caregiver should notify his employer regarding the dates and availment of the Maternity Allocation. The written notice is also applicable to the female worker in the public sector.

Moreover, if the female worker has already collected the total amount of her maternity benefit, the child’s father or the alternate caregiver shall enjoy or use the remaining unexpired leave credits without pay.