Having a family strengthens the quality of life. However, starting a family has been a serious decision to make. There are lots of things to consider before having a family. Aside from being emotionally ready, it would help if you also were financially prepared. The overall cost of raising a family has escalated over the past years.

If you want to start a family or enjoy being a parent and considering expanding your family, ask yourself first if your finances are in order.

Having children is very expensive. Even before you spend on diapers and milk for children, you have to give birth to them, which unfortunately could cost a lot. Like giving birth, prenatal care and prenatal checkups could cost pretty much.

The cost of pregnancy and giving birth should be planned and taken seriously. Giving birth, vaginal or C-section births, aren’t cheap. However, if you are already an SSS member, you can get monetary benefits from SSS Maternity Benefit.

What is the 105-Day Expanded Maternity Leave Law?

The 105-Day Expanded Maternity Leave Law is an act that raises the Maternity Leave period to one hundred five (105) days for female workers. They can also extend for thirty (30) days without pay and grant fifteen (15) days for solo mothers and other purposes.

The Expanded Maternity Leave Law took effect on 11 March year 2019. Hence, female SSS members who underwent live childbirth, miscarriage, or emergency termination of pregnancy, including stillbirths, can avail of the Maternity Leave Benefits under R.A. No. 11210 starting 11 March 2019 and onwards.

The Expanded Maternity Leave Law focuses on the maternal duties and welfare of Filipino female workers who underwent childbirth, miscarriage, and emergency termination, including stillbirth.

To update your membership status, fill out the Static Information Sheet and submit it to any SSS branch.

Who Can Avail of SSS Maternity Benefits?

Filipino female workers who work in the public sector, private sector, informal economy, female members who are voluntary contributors to SSS, and female athletes are entitled to avail of the benefits under the SSS 105-Days Expanded Maternity Leave Law.

Maternity Leave Benefit for Female Workers in the Public Sector 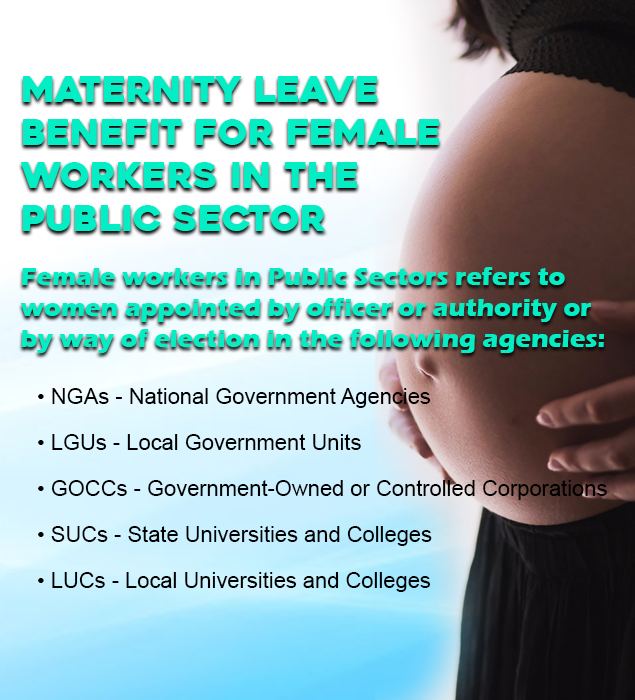 Regardless of employment status or length of service, female government employees can claim Maternity Benefits from the SSS. Whether the female employee is a permanent, temporary, coterminous, fixed-term, casual, contractual, substitute, or provisional worker, she can use the Maternity Leave Law.

Female workers in Public Sectors refers to women appointed by officer or authority or by way of election in the following agencies:

Regardless of the manner of delivery of the child, vaginal or C-Section births, female workers in the Public Sectors shall be granted Maternity Leave for one hundred five (105) days with full pay.

The female worker should inform or give prior notice to the Head of the agency one (1) month or thirty (30) days in advance if she wishes to avail of the Maternity Leave Benefit. The notice should include the effectivity date of the leave.

Female teachers can avail themselves of the Maternity Leave even on long vacations like summer and Christmas vacations. They can use both SSS Maternity Leave Benefit and (PVP) Proportional Vacation Pay.

Maternity Leave benefit for Female Workers in the Private Sector 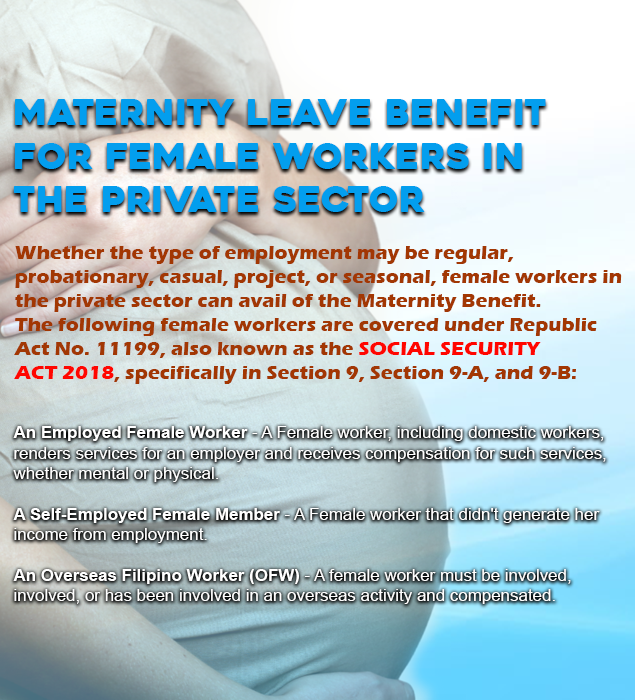 Whether the type of employment may be regular, probationary, casual, project, or seasonal, female workers in the private sector can avail of the Maternity Benefit.

The following female workers are covered under Republic Act No. 11199, also known as the Social Security Act of 2018, specifically in Section 9, Section 9-A, and 9-B:

An Employed Female Worker. A Female worker, including domestic workers, renders services for an employer and receives compensation for such services, whether mental or physical.

A Self-Employed Female Member. A Female worker that didn’t generate her income from employment.

An Overseas Filipino Worker (OFW). A female worker must be involved, involved, or has been involved in an overseas activity and compensated.

Maternity leave benefit for Female Workers in the Informal Economy

Female workers in the informal economy could avail of the maternity leave benefit if she has paid three (3) consecutive months contributions in the twelve (12) month period immediately before the term of their live childbirth, miscarriage, or emergency pregnancy termination.

The following lists are the voluntary contributors who can also avail of Maternity Benefit:

If a female athlete listed as a national athlete of the National Sports Association (NSA) becomes pregnant, a physician will assess her. The Philippine Sports Commission (PSC) physician or an Obstetrician-Gynecologist will decide whether to continue training.

If the physician advises the female athlete to limit the training activities or that she can’t participate due to her condition, she shall go on maternity leave upon medical advice.

The maternity leave will continue until the physician clears and can return to training. While on maternity leave, the female athlete shall continue to receive her allowance and entitles to the same benefits before childbirth and up to six (6) months after.

However, she can continue training and return sooner upon medical advice. If this is the case, the female athlete will continue to receive the same allowances and benefits she received before and during pregnancy.

A female national athlete employed in a public sector shall use only one Maternity Benefit.

Benefits Granted to the Female Workers Under EMLL

Maternity Leave benefits granted to the female worker in the public sector, private sector covered by the SSS, and those in the Informal Economy are as follows:

Whether vaginal or C-section birth, the female worker is granted for the period of one hundred five (105) days for live childbirth. Furthermore, if she qualifies as a solo parent, an additional fifteen (15) days of paid leave shall be granted.

Female workers who had a miscarriage and emergency termination of pregnancy shall be granted sixty (60) days paid leave.

Employed female workers in the private sector and workers in the informal economy shall receive total compensation, including basic salary and SSS maternity benefits.

Furthermore, female workers can also extend their leave for thirty (30) days without pay in live childbirth.

A voluntary and regular female member of the SSS shall be granted health care services for prenatal care, delivery, postpartum, and other pregnancy-related conditions, as controlled by the existing Rules and Regulations of the PhilHealth. 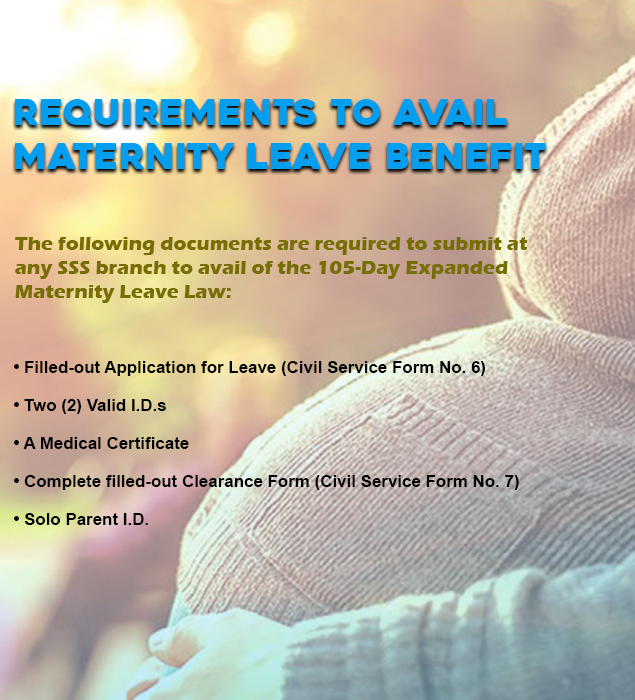 The following documents are required to submit at any SSS branch to avail of the 105-Day Expanded Maternity Leave Law:

Penalties if Failed to Comply with the Maternity Leave Law

Former Presidential Spokesperson of President Rodrigo Duterte Atty. Salvador Panelo warns employers, associations, partnerships, corporations, or any other institution that they will be held responsible if they decline to hire women to evade the forthcoming circumstances regarding the new law, the Maternity Leave Law.

An employer will receive punishment if they neglect and decline to comply with the Provisions of R.A. No. 11210 by a fine of not less than Twenty thousand pesos (Php20,000.00) nor more than Two hundred thousand pesos (Php200,000.00), and imprisonment at the minimum of six (6) years and one (1) day to more than twelve (12) years.